While I found the mapping work on Friday interesting, I don’t know how much it could bring to a study of film censorship that isn’t already pretty clearly known. Whole books have been written on the cities and states that brought legal challenges to the showing or banning of films and the pattern is also pretty clear–challenges were most often brought in Chicago, New York City, and the American South (most frequently Kansas City, but also Memphis, Atlanta, and on down to very small towns). The two biggest municipal areas in the US before 1950 with very diverse populations having clashing opinions on rights and values, and the relatively homogenous Bible Belt with a dominant class who held uniform opinions on rights and values that they perceived as being at odds with Hollywood. 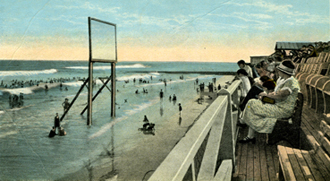 This is not to say that mapping couldn’t be useful to a whole range of aspects of film studies. One of my colleagues at UNC, Robert C. Allen is constructing a digital history of filmgoing in the South (starting with North Carolina and the collections of DocSouth in the UNC libraries) called Going to the Show, beginning with fire insurance records and street block by street block maps. The project is layered and growing and now includes, in addition to mapped theater locations, a set of architectural plans for 23 North Carolina theaters and a case study of the film experience in Wilmington, NC in the first decade of the 20th century.  At my own institution, I see Allen’s project as a model for a multi-modal project with an eye toward sustainability that engages fellow scholars and graduate students in a creative way and that utilizes the unique collections of a particular archive in a way they hadn’t previously considered .